Home > Blog > Breaking the Silence: A Quest for Answers

The doctor was silent as she continuously scanned my 39-week pregnant belly with the ultrasound probe, looking for my son’s heartbeat.  Perhaps she had no words because the truth was unutterably horrible: There was no heartbeat.  I broke the long silence with my sobs.

Upon learning of my son’s death, one dimension of my stillbirth journey began: The quest for answers.  Why?  Was this my fault?  What went wrong?

At first I did not want answers.  That was terrifying and I wanted to bury this all and run away.  And besides, any search for answers might just come to all fingers pointed right back at me.  It was my fault.  An autopsy would just reveal my incompetence.  And wouldn’t not knowing why he died be less horrible than being saddled with a lifetime of guilt?

But my view slowly shifted in the hours that followed.  Running away wasn’t possible.  Maybe it was a fear of regret of not trying to learn why he died, or morbid curiosity, or my training as a scientist.  A few hours after learning my son had died, I told the nurses that I wanted every possible test done, including a full autopsy and genetic testing.

The “why” questions were set aside while I labored, gave birth, held him, cried.  He was born on July 2nd, 2018, his due date, and we named him Elijah David.  Our living children came to visit their dead younger brother in the hospital.  We took photos, held a memorial service, and decided that sunflowers would represent our summer baby with a yellow knit hat.

In the following weeks and months, questions about Elijah’s death returned, consuming my thoughts, and exacerbating the exhaustion that came with my grief.  After three months of waiting, wanting to know, yet terrified of the answers I might receive, I summoned the courage to reach out.  Is the autopsy report complete?  I’m sorry if I’m being impatient.  Soon after, we heard the report summary over the phone: the cause of Elijah’s death was still unknown.

I drove to the clinic to pick up the autopsy report.  The only data in the report that stood out to me as odd was that Elijah’s placenta was “less than 10th percentile” by weight.  I had lots of questions, so I requested to meet with the pathologist who did Elijah’s autopsy, and he agreed.  This conversation, punctuated with tears, is forever imprinted in my memory.  At the meeting, I asked how much smaller than 10th percentile was Elijah’s placenta?  He didn’t know, and indicated that this wasn’t important to know as it wouldn’t bring Elijah back.  The pathologist also explained that Elijah’s placenta may have been mixed up with another placenta, since it is unusual for a large baby who weighs 3,997g to have such a small placenta, at just 397g.

No answers.  None.  Maybe my questions are dumb.  I am out of my league, just an irrational bereaved mother who doesn’t know how or when to say goodbye, demanding the impossible.  I went home, ordered some comfort food for lunch, and watched a sad movie.

I thought the road had ended.  Unknowns are a part of death, right?  Time to come to terms with this.  I had been told that 50% of stillbirths are never explained.  I needed to make peace with not knowing.

Until I learned that I didn’t have to.

On a walk a few weeks later I listened to a podcast titled “The Placenta and What it Tells Us”, produced by the Star Legacy Foundation, a non-profit based in the USA and dedicated to reducing stillbirths.  It was an interview with Dr. Harvey Kliman, a placental pathologist at Yale University.  As first I recoiled at the thought of listening.  He’s just going to say that the placenta is really important and I’ll just be aggravated about the potential placenta mix-up.  Why torture myself with this podcast?  I almost didn’t listen.

But rather than torture, it was a crystallizing moment.  In this podcast, Dr. Kliman explained that a small placenta can cause a stillbirth, particularly at full term when the fetus is growing fast relative to the placenta.  He explained that a fetus who is 10 times the size of their placenta (by weight) faces a very high risk of stillbirth.  I ran home, pulled out the autopsy report with Elijah’s weight and his placental weight and divided these two numbers (3,997g/397g): the ratio was just over 10.

And of course, the questions came right back.  Did I just learn on a podcast why my baby died?  What am I missing?  I must be confused.  Am I looking at these numbers correctly?  Have I gone crazy?

I had to make another call, this time to the hospital pathology department to see if Elijah’s placental tissue had been preserved so that I could mail it to Yale and get a second opinion on the cause of Elijah’s death.  The answer was yes, the tissues were still preserved.  I hung up and there were more tears, hoping this all would be worth another round of emotional upheaval and anxious waiting.

The journey has been long, but I now have some answers to these questions.  Yes, it is possible to figure out if a given placenta goes with a fetus.  Yes, placental weight matters and “less than 10th percentile” is an insufficient level of precision in a stillbirth autopsy.  Yes, an undetected extremely small placenta was the cause of Elijah’s death.  And I learned that placental abnormalities often hold the key for understanding the cause of stillbirths, yet are frequently overlooked by pathologists if they have not received proper training.

As I reflect back on my experience, I can’t help but think: Surely this is not fair to ask of bereaved parents.  These were reasonable questions.  Questions of life-or-death importance.  At the risk of stating the obvious, grieving parents should not need to move mountains to learn why their baby died.  Prenatal care providers and advocates working to reduce stillbirths need to tell parents that, though there are no guarantees of finding a cause, stillborn babies and their placentas should ideally be examined by a trained perinatal pathologist.  Then these desperate families should be offered assistance to take this step if they choose to do so.  Until this offer is routine after a stillbirth, I have learned something to share with other bereaved families:  Speak up.  Ask questions.  Be annoying.  You deserve answers.  The silence you hear from the world around you needs to be broken. 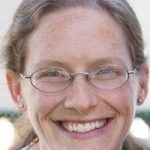 Dr. Ann O’Neill is currently a stay-at-home mother raising her four living children.  She has a Master’s of Science degree in environmental science and a PhD in natural resource science and management from the University of Minnesota.  Ann is a bereaved mother to Elijah who was stillborn on his due date in 2018.  She is working to raise awareness about the importance of placental measurements as a standard part of prenatal care, to detect fetuses at high risk of stillbirth.  Ann can be reached at ann.ebert.oneill@gmail.com.

Ann is a member of the Stillbirth Advocacy Working Group which was founded by the Partnership for Maternal, Newborn and Child Health, and is co-chaired by the International Stillbirth Alliance and the London School of Hygiene & Tropical Medicine.  Email co-chairs Hannah Blencowe or Susannah Leisher at hannah-jayne.blencowe@lshtm.ac.uk or shleisher@aol.com to learn more.