Most of us know someone who has experienced the devastation of stillbirth. You might not be aware that you know them. You might think stillbirths only ever happen in developing countries, due to lack of healthcare quality and access. Or that they are unpreventable. Or that they are so rare that it only accounts for a negligible fraction of the global burden of disease. These misconceptions are often used to silence affected families and justify the expectations that they should just “get over it”.

The stigma around stillbirth is so powerful that most bereaved parents will tell you how difficult they find to be allowed to talk about their children, their loss and grief. Even if some are lucky enough to find compassionate ears and support, this usually comes with an expiration date. Stillbirth and associated grief as ongoing conversation topics, even with healthcare professionals, is often met with uncomfortable and even disapproving looks.

Yet, about 3 months after my son’s stillbirth, when I told my story at a friends’ lunch, a guest felt authorized to speak about her stillborn daughter to her long-time friends for the very first time. A few weeks later, after being denied official registration of my stillborn son by my embassy, because of a legal time-frame, the ambassador herself replied to my email with her own story of stillbirth.

A year ago, I was offered the amazing opportunity of telling my stillbirth story at two side events at the World Health Assembly in Geneva, Switzerland. The thought of being able to tell my story, both as a bereaved parent and a healthcare professional, to an audience filled of leading global health representatives, immediately filled me with a sense of purpose. But more importantly, it gave me legitimacy.

As soon as I started talking about my contribution at the 70th WHA, there was a subtle but noticeable/marked change in how my enduring insistence on talking about stillbirth was greeted among friends and family. The message was clear: If the World Health Organization was interested in hearing about it, stillbirth had to be a real public health and human rights issue, not just a rare, unpreventable, negative pregnancy outcome. From then on, I have felt that I was finally given the all-clear, an official, unlimited, authorization to speak about stillbirth.

This is why giving stillbirth a place at global health events is so important, be it personal testimonials from bereaved parents, healthcare workers, public health experts, scientists, policy-makers or global health stakeholders.

Following my statement at the WHA, the event moderator, a high ranking WHO representative, felt compelled to share his own mother’s story of stillbirth with the audience. Not only did I get a chance to tell my story and raise stillbirth awareness as a global health issue, it also gave him a chance/opportunity to open up about his own stillbirth story. By doing so, publicly and at a major global health event, we both contributed to giving stillbirth a place on the global agenda and hopefully gave a strong signal to the world that it is ok and important to talk about stillbirth, that stillbirth affects us all in some way. 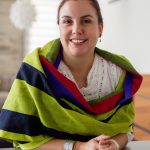 Maria Luisa Tejada de Rivero Sawers holds a medical degree from the University of Geneva, Switzerland. She worked as an obstetrician and gynaecologist at the University Hospitals of Geneva, with a special interest in cross-cultural consultations and psychologically or socially vulnerable groups. She has been living in Mexico since 2010 and is currently finishing her MSc in Public Health at the London School of Hygiene and Tropical Medicine. She advocates for sexual and reproductive health with a focus on perinatal loss, stillbirth and abortion. She is a member of the Stillbirth Advocacy Working Group. Her second son, Pablo, was stillborn on July 30th 2010.