Home > Blog > Death in the city: Can Kampala mothers, their newborns be saved?

When Kawuma’s wife went into labour in the wee hours of that night on a date which he doesn’t recall four years ago, his option was to rush her to the nearest government Health Centre IV which serves his Kisenyi slum in Kampala. However, the gate man told him there was no one to help her at that moment. The next stop was Mulago National Referral Hospital where a quack took advantage and lied to him to part with UGX 50,000 so he would get him a doctor. Kawuma waited for over an hour and neither the quack nor the promised doctor surfaced to help.

Kawuma was then advised by an onlooker to try a private facility (name withheld) where he was told the baby was tired and the mother had to undergo an emergency C-section. But he was told that that could only be done after he made a deposit of UGX 500,000 which he did not have. On reaching out to a friend, he advised him to try Mpigi Health Centre which is one hour away from Kampala. Although, Kawuma’s wife got that important operation, it was too late for the baby who they lost hardly two hours after delivery. This became another neonatal death in the statistics of Uganda.

Listening to Kawuma’s and such similar stories during the recent formative studies for Kampala Slum Maternal and Newborn (MaNe) project makes sense of the grim statistics that make Kampala one of the most dangerous cities for mothers and newborns. Based on the statistics we have derived from the government’s own health facility data, we estimated 200 maternal and 4000 perinatal deaths occur per year in Kampala health facilities with 64 percent of the latter being stillbirths, or babies who die before they are born. The most affected are persons living in informal settlements with limited access to health care services. Surprisingly, ninety percent of these deaths are preventable with known interventions that are already policy in Uganda.

Sadly, despite it being a policy requirement, these deaths are hardly audited to find out the cause of death and find remedial action to prevent future occurrence. While the Kampala Capital City Authority has a 100 percent target of auditing perinatal deaths, only a few are audited, so preventable deaths continue to happen. Between July 2015 and now, only 6 percent of the perinatal deaths were audited. And when it comes to maternal deaths over the same period, only 18 percent of these deaths have been audited.

For starters these audits entail in-depth systematic reviews of maternal deaths to describe their underlying health social and other contributory factors to the deaths, and the lessons learned are used in making recommendations to prevent similar future deaths. Audits are not meant to apportion blame or shame but help identify and pick lessons from the solvable factors that might save the lives of more mothers and newborns in future.

From our reviews and interactions with persons living in Kampala’s informal settlements, the existing healthcare system is not providing quality and responsive services that address the real needs and expectations of the urban poor pregnant women and their newborns. With this state of affairs, the urban pregnant women are not adequately seeking services. No wonder, an analysis by Makerere University Maternal Newborn and Child health Centre of Excellence shows that right now, death of women and children in Kampala city is almost at the same rate as that in rural areas, and if nothing is urgently done, Kampala will overtake the villages. In other words, health wise, it is no longer advantageous to live in the city when you are the poor. The reasons for this are many but need further systematic research in order to guide policy and practice.

However, hope is not lost. With support from the United States Agency for International Development (USAID), a partnership bringing together Kampala Capital City Authority (KCCA) and PSI Uganda, and Makerere University School of Public Health Centre of Excellence for Maternal Newborn and Child health that makes up the MaNe project will for the next three years initiate and test innovative interventions to improve maternal and newborn outcomes in urban slum settings in Kampala, starting with the divisions of Makindye and Rubaga. With this, we hope to contribute to the development of the urban health policy for Uganda and beyond. However, the problem is huge and cannot be solved by this one project, it requires a concerted multisectoral effort with a focus on the poor by harnessing Kampala’s mixed public, private and informal health system. We all need to work to stop avoidable death in the city.

*This commentary was first published in The New Vision Newspaper on May 3, 2019 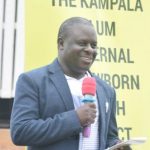