This blog was originally published on New Security Beat here.

“Midwifery is what women want and what the world needs,” said Anneka Knutsson, Chief, Sexual and Reproductive Health Branch, United Nations Population Fund (UNFPA) at the Fourth Global Midwifery Symposium held at Women Deliver on June 2, 2019. More than 200 people, mostly midwives and global midwifery experts, attended the symposium titled, “Empowered Midwives, Transformed Communities.” Organized by UNFPA, the International Confederation of Midwives (ICM), and World Health Organization (WHO), in collaboration with Jhpiego, UNICEF, Laerdal, and the Canadian Association of Midwives, the all-day symposium highlighted how the midwife-led continuity of care model and women-centered care can improve outcomes for women, their newborn, and their families. The discussion also focused on the importance of enabling environments and productive collaborations between midwives and other health professionals.

The symposium culminated in a global Call to Action drafted by the organizers and co-signed by the leading health professional associations, namely International Federation of Obstetricians and Gynecologists (FIGO), International Council of Nurses (ICN), and International Pediatric Association (IPA). The Call demands continued advocacy for policies to increase the midwifery workforce and increased focus on regulatory structures consistent with a midwifery model of care. It further calls for an enabling environment for midwives to practice to their full scope of practice and a functional health infrastructure. 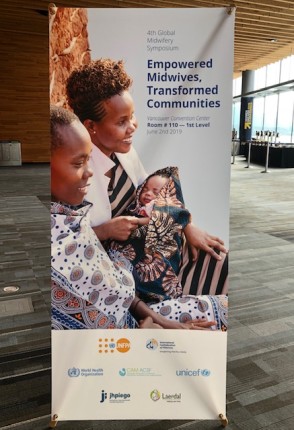 With WHO and the World Health Assembly designating 2020 as the “International Year of the Nurse and the Midwife,” the symposium recognized the essential role nurses and midwives play towards achieving the goal of universal health coverage. Nurses and midwives make up nearly half of the global health workforce and estimates state that by 2030, the world will need 9 million more. While midwives are most recognized for their significant role in working to meet Sustainable Development Goal (SDG) 3, which aims to eliminate maternal and newborn mortality, end the AIDS epidemic, and ensure universal access to sexual and reproductive health, they also support gender equity (SDG 5) and contribute to economic development (SDG 8).

Benefits of Midwife-led Continuity of Care

“Midwives deliver more than babies,” said Franka Cadée, President of the International Confederation of Midwives (ICM). Midwives save lives. Research shows that when midwives are educated to international standards, and midwifery includes the provisions of family planning, the practice of midwifery could avert over 80 percent of all maternal deaths, stillbirths, and newborn deaths. Well-trained midwives can also deliver 87 percent of all essential sexual, reproductive, maternal, and newborn health services. Midwives provide family planning counseling and provisions. They prevent mother to child transfer of HIV, malaria in pregnancy, obstetric fistula, and sexually transmitted infections. They also provide post-abortion care services and essential newborn care. The critical role of midwives during women’s antenatal, intrapartum, and postnatal periods is well documented, and research shows that midwife-led continuity of care (MLCC) greatly benefits women and supports them not only through their reproductive years, but throughout their lifetimes.

MLCC models of care put the midwife at the center of the care structure. The midwife takes the lead in planning, organizing, and delivering the patient’s care from the first antenatal appointment, through delivery, and into the postpartum period. “Midwives must be fully engaged in all local, national, regional, and global policy decisions that affect their professional practice and the needs of women and their newborns in their communities,” said Geeta Lal, Global Midwifery Programme Coordinator, UNFPA. Studies show that pregnant women report higher levels of satisfaction in a midwife-led continuity model compared to other models of care. What’s more, midwives themselves report higher levels of job satisfaction and less burnout when working in a midwifery continuity of care model.

An Enabling Environment Leads to Strong Partnerships and Better Care

The relationship between doctors and midwives often involves a power struggle with midwives experiencing restrictions and limitations on the care they can provide, as well as unfair treatment and lack of trust from medical staff, lack of recognition for their achievements, and low levels of compensation and promotion.

In contrast, for midwives to flourish, effective midwife-led continuity of care needs a conducive and enabling environment, as well as collaborative partnerships with other healthcare professionals (e.g., nurses, obstetricians, gynecologist, anesthesiologists, and pediatricians). These factors allow midwives and other healthcare professionals to deliver high quality services, to evolve as practitioners, and to empower the women in their care. Every midwife must have the opportunity to work in an enabling environment, which Sally Pairman, Chief Executive of ICM described as “an environment which values and respects midwives and values and respects women.”

An enabling environment for midwives must include the following:

“Partnerships can expand the scope of midwifery,” said Dr. Koki Agarwal, Director of the Maternal and Child Survival Program and Vice President of DC Operations at Jhpiego. Midwives must partner with doctors, nurses, and other medical staff. They must also ultimately partner with women and their families to support them to make important health decisions before, during, and after a safe and fulfilling birth. Continuous partnering between midwives, women, and their families supports trust building, improved communication, and respect for all parties.

“If we continue to treat health as just health, we will not get there, we will not change what needs change. It is so much more… it is about power dynamics,” said Katja Iversen, CEO of Women Deliver.

Power was the theme for the 2019 Women Deliver Conference. Power plays a significant role at each level of the work needed to meet Sustainable Development Goal 3. Midwives and the women they work with must have the power to make decisions regarding their own health, treatment, and plans.

Because midwifery involves a primarily female-led workforce that provides care to women, inequality inherently affects every aspect of the environment in which midwives work. Power must be available to midwives for them to be able to properly care for women and to have a positive effect on women’s health. One way to increase this power is to continue to support the midwife-led continuity of care, which puts the midwife in the center of the decision-making with the patient. Another way to empower midwives is to enrich collaborations between midwives and their medical colleagues. Building the status of the profession of midwifery from within will help expand midwives’ impact in their communities and within healthcare.

Power is also influenced by social constructs like race, ethnicity, and religion. “Indigenous women are 4.5 times more likely to die giving birth than their white counterparts in Australia,” said Bashi Hazard, Legal Director of Australia and New Zealand’s arm of Human Rights in Childbirth Lawyers Network. In Canada, host country to Women Deliver 2019, 40,000 women must travel beyond their communities each year to give birth. Local midwives support women’s need to give birth closer to home. Indigenous midwives are fluent in the culture, enabling them to better support their clients and not only improve women and infant health, but also reduce many of the disparities that affect indigenous populations. Empowered midwives truly transform communities.

“Midwifery is a game changer for ending preventable maternal deaths,” said Dr. Princess Nothemba Simelela, Special Advisor to WHO Director General on Strategic, Programmatic Initiatives. “Be angry, go to Nairobi and talk to politicians! Don’t be apologetic, make noise and get midwifery to the top of the agenda.”