While teaching nursing students in Uganda for many years, I, along with my friend and colleague, Lynn Zdechlik, witnessed many maternal and perinatal deaths. As nursing professors, and midwives, we felt burdened to educate nursing, midwifery, and medical students on high-risk perinatal care. Kiguli states in her article for Lancet that “Uganda ranks 10th in the world for stillbirth and strategies are needed to address preventable stillbirths as well as follow up with supportive services. (Kiguli, J et al., 2016)

We spent two weeks in 2017 holding seminars in many hospitals and universities across Uganda. Lectures focused on the prevention of maternal death and stillbirth as well as caring for families following perinatal loss. One of our seminar sites was an eastern regional hospital in Uganda. A number of midwives at this hospital had encountered a different standard of perinatal bereavement care during a trip to the United Kingdom in 2015 and these midwives had a vision for improved care. Together, the U.S. team and the Ugandan team began to develop and implement a high-risk perinatal program. This hospital-based program is part of the organization “Birth With Dignity” (birthwithdignity.org). Both medical and nursing administrative leaders have been supportive of the program. The medical director stated, “This bereavement program will be the first of its kind in the country.”

We equipped and educated the Ugandan leaders with postpartum hemorrhage and perinatal bereavement teaching materials and a “Mama Natalie” simulator that the leaders use while continuing to educate hospital staff. Every stillborn baby receives a blanket. The nurses are then able to wrap and present the baby to the family, encouraging the mother to see and hold her baby, something not traditionally done in Uganda. An instamatic camera allows nurses to encourage families to receive a picture of their deceased baby, again not something that is part of Ugandan tradition after stillbirth. Nurses try to balance cultural norms while increasing awareness of global bereavement care standards.

Best practice guidelines recommend that nurses should offer parents the opportunity to see and hold a stillborn baby. Many studies also suggest that parents can benefit by spending time with their stillborn baby when they are in a supportive environment. (Flenady V, Boyle F, Koopman L, Wilson T, Stones W, Cacciatore J., 2014)

The statistics for maternal death at this hospital are significantly lower this year than last year. Five nurses on the maternity ward and neonatal unit have been doing bereavement care and helping to advocate for mothers to see and hold their dying or stillborn babies. We believe that these changes are significant. Ugandan and U.S. leaders have met quarterly via Skype for the past two years and continue to do so. We spent one month together in Uganda this past February and enjoyed an all day workshop where we explored our roles and continued to cast the vision for saving mothers and babies while improving bereavement care. We had hoped to teach a larger number of nurses this past February and our teaching sessions have not always gone smoothly. There continue to be barriers and they are complex (no running water in the hospital for a week and no internet or power at times). Birth With Dignity now serves as a financial and support resource to the hospital program as the program is now being implemented by the Ugandan team of nursing leaders.

One of our Ugandan leaders, Christine Limio, recently presented at the national “Uganda Nurses and Midwives Conference.” Christine presented on the topic “Bereavement Services in Mbale Hospital”.  We are proud of the nursing leaders who not only have implemented a bereavement program at their hospital, but are also leading other nursing leaders throughout Uganda. Their desire is to change the maternal and perinatal death rates in their country, while raising the standard of bereavement care.

Our hope and prayer is to continue to promote the dignity of life in childbirth, for both mother and baby. 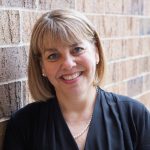 Sue’s nursing and teaching career spans over 30 years. Sue has done research in the area of perinatal bereavement and works as a Perinatal Nurse Navigator at Maple Grove Hospital, with families who have suffered the early or late loss of a baby. She is also an adjunct nursing professor at Bethel University and has practiced maternal child nursing in a variety of settings. Sue, along with a colleague, is currently developing a high-risk perinatal program (www.birthwithdignity.org) at a hospital in Mbale, Uganda. They are teaching nurses how to prevent maternal and newborn death and how to care for families who suffer a stillbirth. Sue has published a number of articles related to faith development in children, nursing education, and perinatal bereavement. She has also led many nursing conferences in the US and Spain.