Any man’s death diminishes me, because I am involved in mankind.
— John Donne

Stillbirth, the death of a baby before birth, is one of the most devastating events in obstetrics. It profoundly affects women’s and their families’ wellbeing, while the stigma associated with it makes it an unspoken sorrow in many countries. Around 2.6 million stillbirths occur each year, of which 98 percent are in low and middle-income countries, mostly due to poor living conditions and lack of good care during pregnancy and while giving birth. Stillbirth therefore is regarded as a sensitive indicator of the quality of healthcare, the living environment, and inequity in a society.

Although the rate of stillbirth in the developed world is much lower compared to that in developing countries, stillbirth is still considered a burden due to disparities observed among the populations within these countries despite the availability of optimal care. Of almost 244 million international migrants globally, 70 percent live in high-income countries.(1)  Higher rates of stillbirth, greater than fourfold in some situations, have been reported for immigrants compared to non-migrant populations in several research studies.(2, 3)  For instance, women from non-Western countries such as Turkey, Morocco, Pakistan, and Somalia were at higher risk of stillbirth than women of European, American, and Australian backgrounds.(2-4)

Among migrant populations, women from refugee backgrounds are considered the most vulnerable population for adverse birth outcomes such as stillbirth.(2)  With all the stressful life events they have been through before and during immigration, including fear of persecution, loss of loved ones, poverty and tough living conditions in transition or camps, it is no wonder why.

However, the increased risk of stillbirth has also been reported for some ethnic minorities from non-refugee populations as well as for later generations of migrants born in the developed world.(5) This suggests that ethnicity could be a risk factor by itself or as a proxy for unknown environmental, cultural, genetic, or other transgenerational influential factors. Could it be a result of different lifestyle approaches, lack of access to healthcare services, or barriers to utilization of such services? Are these differences due to a higher chance of exposure to environmental and occupational factors with a detrimental effect on unborn babies, or a consequence of being exposed to racism, domestic violence, or bullying? We are not yet entirely sure, but evidence is gathering.

It is vital to recognize and thoroughly understand why migrants and ethnic minorities are at increased risk of stillbirth and to find appropriate preventive strategies. Migrants make up a considerable proportion of the population in high-income countries, more than a quarter in some nations such as Australia, and their grief after stillbirth is just as real as that of non-migrants. They suffer equally from lives lost due to stillbirth. They tend to have more children than native residents; consequently, they are exposed to more risk; at the same time they do not necessarily have access to the social support networks that non-migrant individuals may have. These women are not living in the land where they were born, with family and friends around them.

Do you hear the bells ringing?

Human beings are members of a whole, in creation of one essence and soul. If a member is afflicted with pain, other members uneasy will remain…
–Iranian poet Saadi

Please join us! Let’s end the silence around stillbirth! 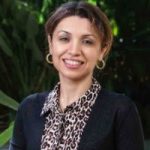 Maryam Mozooni, MD, is a medical doctor trained as a general practitioner in Iran, and the mother of two healthy children. She recently immigrated to Australia, where she works as a research fellow at the University of Western Australia. Her research interests include public health, health services and reproduction, with a focus on migration and ethnicity. She is also a member of the Stillbirth Advocacy Working Group (SAWG) co-chaired by the International Stillbirth Alliance and London School of Hygiene & Tropical Medicine. This blog post is the second in an occasional series on various aspects of stillbirth that are submitted by SAWG members.