Home > Blog > The Power of Compassion: How Legislators Can Help After Stillbirth

“This is one of those things we can do as a body that really is going to make a difference, to real people in this world.” Washington State Senator Ron Muzzall, speaking in favor of allowing issuance of a Certificate of Birth Resulting in Stillbirth in Washington State.

In November of 2018 I was blissfully anticipating the birth of my second child, a boy we had already named Kegan Christopher. I was full of joy and expectation as we neared his due date; I had no idea that I would soon become one of the 1 in 160 US pregnancies that end in stillbirth.

The day Kegan left us was a beautiful, sunny fall day, rare for the rainy chill that usually pervades Seattle autumns. I had taken his big sister for a walk behind an old abbey, cheerfully rubbing my swollen tummy and chatting with them both about how the next time we came to the abbey, baby boy would be in a carrier on my chest. I was nine months pregnant, just over a week before my due date. Life seemed perfect, radiant, ideal. And for that moment, it truly was. I had a standard prenatal checkup that afternoon, and cheerfully kissed my daughter goodbye before joking with the babysitter that she may need to stay later if I went into labor at the doctor’s office. I felt so at peace, so connected to my son. I am eternally grateful that my last moments with him were overflowing with love; I will forever be haunted that I don’t know exactly when those last moments ended. Based on his movements that day and appearance at birth, I am convinced he died either on the way to the doctor’s office or shortly after arrival – he was so close to being safe, but not close enough to keep our hearts from being torn in two. Kegan was 6 pounds, 10 oz and was born perfect, breathless, and devastatingly silent. The only sounds in the room when he entered it were my sobs of anguish and my husband falling across the bed as his legs gave out.

During the blur that followed Kegan’s birth, we were given forms to fill out to send to the morgue and the funeral home. Forms detailing his death certificate, forms allowing an autopsy, forms granting permission for cremation. Forms we were required to fill out highlighting again and again death. He has died, your son has died, and you must bury him. Nothing to acknowledge his birth. Nothing to remember the nine months he had slept in my belly, pushing and punching his fists into my ribcage while he reshaped our hearts. Nothing to acknowledge the twelve hours I had labored to deliver him, choking on my tears as I was forced to participate in a final, brutal act to end his existence. Nothing to show he was here, he was born, he mattered. Nothing to hold onto. Nothing to take solace in.

It was only later that I discovered Washington was one of only a handful of US states that didn’t allow bereaved parents to apply for a stillbirth certificate, either a Certificate of Birth Resulting in Stillbirth (CBRS) or a Certificate of Stillbirth (CoS). During this time, while drowning in grief and trauma symptoms, I also discovered research describing impossibly high rates of major depressive disorder and post-traumatic stress disorder amongst mothers of stillborn babies. I started to search for some way I could help, something, anything that would allow me to help other moms claw their way out of the darkness that descends following the death of your child, anything that would help reduce the shame, silence, and stigmatization that so frequently follow stillbirth.

The next two years were filled with meetings with state representatives, state senators, lobbyists, and other brave, bereaved parents. Side by side, we fought for our children by telling our stories over and over and over, by testifying on the Senate floor, and then when COVID hit, by testifying over our computers. We were confronted with a wave of misinformation surrounding stillbirth and unexpectedly found ourselves in the positions of educators – educators on stillbirth, but also educators on grief. The first year, our bill did not pass. I was devastated, retreating to my office to stare at my notes, wondering how I could have let my perfect son down a second time. We forged on, and slowly, ever so slowly, our message began to trickle through.

Too often in this world, we believe we are powerless. We believe our actions cannot make a difference, that the loss is too big, the hurt too great, the wound too deep. And yes, nothing will ever close the wound of stillbirth. Nothing will ever undo the loss of my son; nothing will ever make our family whole. And yet, we are not powerless, and those around us are equally not powerless. By simply acknowledging the reality of what stillbirth is, these legislators have offered heartbroken women something to hold onto. They have directly impacted the people they represent in one of the most meaningful ways available to them. They have seen the hurt of the people they represent and have chosen to listen to, learn from, and respond to that hurt. They have made the darkness of stillbirth just a little less dark through the simple gift of acknowledgement. We have the power to lift each other if only we are brave enough to listen, to learn, and to choose compassion. 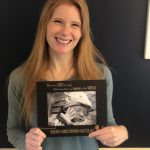 Dr. Terrell Hatzilias is a mother of two, both to her vivacious, active little girl and her beautiful, tragically deceased little boy. Terrell has a Bachelor of Science in Biology from Duke University and a PhD in Neuroscience from Emory University and currently works as a medical writer. Terrell’s second born child, Kegan Christopher, was stillborn at term in 2018, forever altering the entire Hatzilias family. Terrell hopes that by advocating on behalf of families who have endured stillbirth, she can both spread stillbirth awareness and bring comfort to others in their time of need.