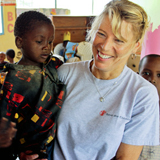 Carolyn S. Miles is President & Chief Executive Officer for Save the Children, the leading independent organization creating lasting change in the lives of more than 70 million children in need in the United States and 120 countries around the world. Carolyn became the first woman to head Save the Children in September 2011, after joining the organization in 1998 and serving as its Chief Operating Officer for the past seven years. She has traveled to Save the Children’s field operations in nearly 50 countries, and during her tenure as COO Save the Children doubled the number of children it reaches with food, educational, and other programs, and helped grow the organization’s budget – 90 percent of which goes directly to programs serving children – from $140 million to more than $550 million.