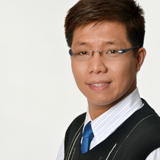 Medical Specialist and Focal Person for the Philippines Newborn Care Program Family Health Office, Department of Health (DOH-FHO) Dr. Anthony P. Calibo is a paediatrician and child health specialist. He graduated with a Bachelor of Science degree in Public Health at the University of the Philippines Manila College of Public Health (UPM-CPH). He obtained his Doctor of Medicine at the St. Luke’s College of Medicine – William H. Quasha, Esq. Memorial in Quezon City. He received his paediatric residency training from the Institute of Paediatrics and Child Health of the St. Luke’s Medical Center in Quezon City (SLMC-QC). During his paediatric residency training, he served as Assistant Chief Resident for Research and also for Community Paediatrics and has been a member of the hospital’s Breastfeeding Working Group up to the present. He is a diplomate of the Philippine Paediatric Society since 2009. Dr. Calibo’s interest in preventive paediatrics, public health research and health promotion has been evident since his days as a medical student. His paper on prenatal paediatric visit practices among obstetrician-gynecologists and paediatricians in Metropolitan Manila has brought him to Athens, Greece; Florence, Italy, and Geneva, Switzerland where he had presented his work in separate congresses and conferences. The same paper earned him the 2007 Young Investigator Award from the Research and Biotechnology Division of St. Luke’s Medical Center – Quezon City. Aside from being an affiliate consultant of the St. Luke’s Medical Center’s - Institute of Paediatrics and Child Health, he has also served as research coordinator of from 2008-2011, member of the Philippine Paediatric Society Committee on Scientific Meetings and Committee on Research from 2010-2011. He also teaches epidemiology and biostatistics as a part-time faculty member of the St. Jude College Graduate School Master in Hospital Administration (MHA) program. Dr. Calibo has entered government service as a medical officer in 2007 and worked on trade in international health services for three years at the Department of Health. He became a supervising health program officer in 2010 and handled the newborn care program of the National Center for Disease Prevention and Control. He has been promoted as medical specialist IV in April 2012. He is currently pursuing a Master of Science Degree in Health Systems Management at the Philippine Women’s University Graduate School in Manila. Working at the Department of Health has enabled him to contribute to national health policy development and public health program implementation, monitoring and evaluation. His training both as a clinician with a public health background and keen interest in epidemiology and biostatistics has enabled him to harness these skills to further the improvement of neonatal and child health conditions of the Philippines towards achievement of the United Nations Millennium Development Goals.