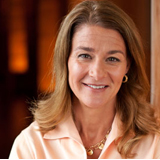 As co-chairs of the Bill & Melinda Gates Foundation, Bill and Melinda Gates shape and approve foundation strategies, review results, advocate for the foundation’s issues, and help set the overall direction of the organization. They meet with local, national, and international grantees and partners to further the foundation’s goal of improving equity in the United States and around the world. They also use many public appearances, including speeches, interviews, and articles, to focus attention on these issues. Melinda Gates received a bachelor’s degree in computer science and economics from Duke University in 1986 and a master’s in business administration from Duke’s Fuqua School of Business in 1987. After joining Microsoft Corp. in 1987, she distinguished herself in business as a leader in the development of many of Microsoft’s multimedia products. In 1996, Gates retired from her position as Microsoft’s General Manager of Information Products. Since then, she has directed her energy toward the nonprofit world. In addition to her role with the foundation, she is a former member of the board of trustees of Duke University and is a former co-chair of the Washington State Governor’s Commission on Early Learning. Bill and Melinda Gates live in Medina, Wash., near Seattle. They have three children.