This article was originally published in Al-Jazeera here.

It is a busy mid-morning at Achikondi Women’s Clinic in Area 23, a township in Malawi‘s capital city Lilongwe, and Glory Honde is holding her healthy baby girl in a blanket.

She gave birth here three months ago and is back to have her daughter weighed.

About 10 more women – some pregnant, others who recently gave birth – are at the clinic, which opened in 2008.

It is small and has limited resources, but is precious in a country where the neonatal mortality rate is 22 deaths per 1,000 births – higher than the global average of 17, and far exceeding the United States’ rate of four.

“I never expected Madam Charity Salima to take such good care of me,” said Honde, whose child comes in at 4kg. “I stayed here for three days but it didn’t feel like I was at a clinic whatsoever.

“It felt like I was home, she treated me like I was her own daughter, that’s how well she took care of me.”

Many expectant mothers in Malawi have difficulty in accessing public health facilities and have to travel long distances to access medical care.

Moved by witnessing too many hopeful couples leave the hospital without their baby when working in a state-run facility, Charity Salima decided to establish the Area 23 clinic.

“The very first baby I delivered was in 2002, it was very late in the night and it was raining heavily,” Salima said.

“The woman and her husband never had transportation to go to the hospital so they decided to call me. Even though I never had the resources, I managed to deliver a baby girl. From that moment, I knew that this was a calling.” 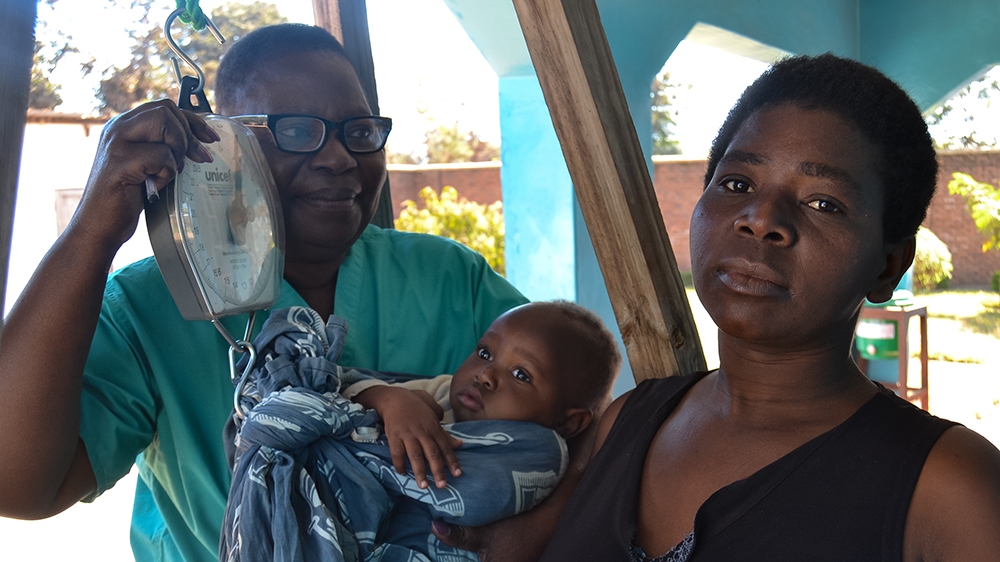 Charity Salima came out of retirement as a midwife, having worked at state hospitals, to launch an independent clinic for mothers with poor access to healthcare [Rabson Kondowe/Al Jazeera]

Born in the late 1950s in a northern village, Salima was raised by her grandmother, who struggled financially, but still managed to go to school.

She studied nursing and midwifery and by 1980, was working as a nurse at Queen Elizabeth Central, the largest referral hospital in Malawi. She later joined Kamuzu Central Hospital and Mzuzu Health Centre before retiring in 2006.

During her career, several women from Area 23 approached Salima at her house – she also lives in the area – seeking help.

With no resources, she would help them. After several years, she finally decided to rent a house and run it as a clinic.

Soon the Norwegian Nurses Organization gave Salima 2 million kwachas ($2,625) to buy land to build her own facility, while a British friend contributed funds to complete the clinic.

Salima is regarded as Malawi’s Florence Nightingale, and since 2008, when the clinic opened, she has delivered more than 8,000 newborns with no record of a single death, of both mothers and babies.

Her 24-hour clinic is staffed with three other nurses.

“As far as delivery is concerned, we always monitor the pregnancy of the woman. When the situation is tough and beyond our control, we then refer them to Bwaila District Hospital right away with no delays, because we are dealing with two lives – the life of the baby and the life of the mother,” she told Al Jazeera.

On average, the clinic delivers between 40 and 60 babies a month, charging 15,000 kwachas (about $20) – a low sum that still many expectant mothers cannot afford.

“We cannot deny people the right to access healthcare just because they don’t have money,” said Salima. “Some of the challenges we face are the huge electricity and water bills that are supposed to be paid monthly, we have limited resources and as I speak, we don’t have an oxygen concentrator.”

Achikondi depends on donations. Nurses in Scotland gave Salima the vehicle she uses to transport patients. The Freedom from Fistula Foundation, also based in Scotland, is helping with the day-to-day costs until September.

Dorothy Ngoma, the former president of the National Organisation of Nurses and Midwives of Malawi, said the country needs more people like Salima.

“She has been delivering women from her community for free in her kitchen way before she established the clinic, and today to have delivered without losing a baby or a mother is no mean achievement,” she told Al Jazeera.

According to Unicef, in Malawi, the main causes of neonatal deaths in 2015 were prematurity (33 percent), birth asphyxia and trauma (25.8 percent) and sepsis (18.6 percent).

The health ministry is attempting to address the challenges, but progress is slow.

“It’s very sad that as a country we are doing badly when it comes to this, we are probably fairing third in the world on maternal mortality,” said Ngoma. “If you ask me why? It’s the same thing we talk about every day, our leadership does not put maternal health as a top priority, it’s not that there’s no money, the money is there but it’s being misused.”

Salima was recently honoured by the United Kingdom with a Common Point of Light Award.

“My hope is to open more maternal health clinics in communities and townships because people from such areas are not closer to such medical care,” said Salima, “a situation which is very unpleasant for pregnant women.”