This article originally appeared in The Indian Express here. By Anuradha Mascarenhas.

If it’s Monday, the color code for bedsheets at Nashik civil hospital’s special newborn care unit (SNCU) is yellow, if it’s Tuesday, the sheets are pink, and so on for each day of the week. This simple measure ensures that the bedsheets have been washed and sterilized by autoclave. Similarly, there are separate mops and buckets for each cubicle. A motivated staff also checks whether the surfaces of warmers have been cleaned.

Implementation of such infection control measures can be complex, but with simple practical steps, as well as dedication and training, Maharashtra’s health department is moving ahead to reach its goal of bringing down neonatal mortality rate to single digits. According to the Sample Registration System (SRS) data in 2017, in Maharashtra, the Infant Mortality rate (IMR) has reduced to 19 per 1,000 live births from 33 in 2008. The Neonatal Mortality Rate (NMR) declined from 24 per 1,000 live births in 2008 to 13 in SRS 2017, and the state comes a close third after Kerala and Tamil Nadu.

Maharashtra’s efforts are also in keeping with Every Newborn Action Plan launched at the World Health Assembly in 2014 led by the World Health Organisation and UNICEF to reduce neonatal mortality. Dr. Archana Patil, in charge of the state family planning bureau headquartered in Pune and Additional Director of Health, Maharashtra said that a strict watch on hygiene measures has helped bring down the mortality rate of babies across the SNCUs in the state (see box). Mentoring visits by expert pediatricians, weekly death audits at each of the state’s SNCUs have started showing results. For instance, the mortality rate at a single SNCU at Nashik civil hospital was as high as 15 per cent when 55 extremely low birth weight infants died out of 346 admissions. Dr. Dinesh Thakur, in charge of Nashik SNCU, said that they still had 250-300 neonates being admitted every month but the mortality rate is less than 8 per cent. 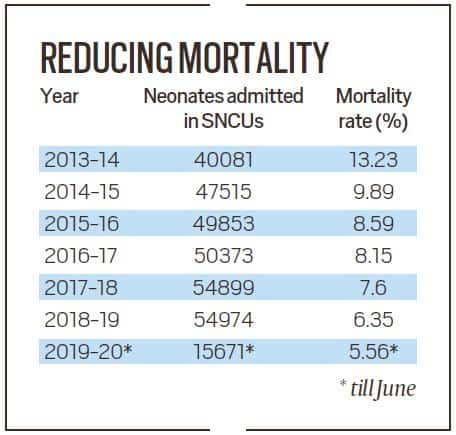 Just like the Nashik SNCU, there are a total of 37 SNCUs for sick neonates set up at 20 District/Civil Hospitals, 10 Women Hospitals and 7 Sub-Districts Hospitals in the state. Sick neonates are also referred from outside hospitals. These are specialized newborn and sick childcare units at district hospitals with specialized equipment. These units have a minimum of 12 to 16 beds with a staff of three medical officers, eight nurses, and four support staff to provide round the clock services for a newborn or child requiring special care.

Another 180 Newborn Stabilization Unit have also been set up even as the state plans to add another 18 SNCUs and 59 Continuous Positive Airway Pressure machines, which address sleep disorders.