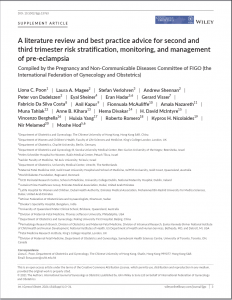 Pre- eclampsia is a multisystem disorder that typically affects 2%– 5% of pregnant women and is one of the leading causes of maternal and perinatal morbidity and mortality, especially when the condition is of early onset. Globally, 76 000 women and 500 000 babies die each year from this disorder. Furthermore, women in low- resource countries are at a higher risk of developing hypertensive disorders of pregnancy and pre- eclampsia compared with those in high- resource countries. This is because socioeconomic, educational, and environmental disadvantages have historically beset vulnerable communities leads to diabetes (before and during pregnancy), thus increasing the rates of pregnancy complications, in particular pre- eclampsia.

Pre- eclampsia has been traditionally defined as the onset of hypertension accompanied by significant proteinuria after 20 weeks of gestation. Recently, the definition of pre-eclampsia has been broadened. Now the internationally agreed definition of pre-eclampsia is that proposed by the International Society for the Study of Hypertension in Pregnancy (ISSHP)

This document outlines current global standards for the risk stratification, monitoring, and management of pre- eclampsia in the second and third trimester of pregnancy. It provides the most pragmatic advice for different resource settings— keeping in mind the feasibility, acceptability, and ease of implementation of the advice— to significantly lessen the health and economic burden caused by pre- eclampsia. Suggestions are provided for a variety of different regional and resource settings based on their financial, human, and infrastructure resources, as well as for research priorities to bridge the current knowledge and evidence gap.