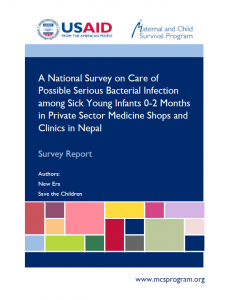 Nepal has made significant progress in reducing child mortality from 153 per 1,000 live births in 1990 to 39 per 1,000 live births in 2016. Despite this progress, the latest Demographic Health Survey (DHS) estimates indicate that neonatal mortality contributes to 54% of under-five mortality. Furthermore, one of the leading causes of newborn deaths in Nepal is neonatal infection (sepsis), which is preventable and treatable.

Nepal’s Every Newborn Action Plan (NeNAP) 2015 aspires to reduce newborn deaths to 18.9 per 1,000 live births by 2020 and to 10.9 per 1,000 live births by 2035. To achieve these goals, improving the quality of infection management requires more attention, given the burden of newborn deaths resulting from possible severe bacterial infection (PSBI) in Nepal.

The private sector accounts for the largest proportion of childhood illness treated in Nepal. According to the 2016 DHS, 74% of caretakers who sought care for children under five years with acute respiratory infection went to the private sector, mostly to private pharmacies (34%) or private clinics (32%). A recent qualitative study that assessed care-seeking for sick newborns also found that private providers were the predominant source of care for newborns due to their proximity, flexible hours, and familiarity. However, nationally representative data on the quality and appropriateness of care for sick young infants provided in the private sector are limited.

In 2016, Save the Children’s Saving Newborn Lives (SNL) program supported the Child Health Division (CHD) of the Department of Health Services (DoHS) to carry out a situation analysis of the management of PSBI cases in medicine shops in six districts of Nepal. The study identified several concerns related to quality of care (e.g., inaccurate and potentially dangerous weighing/dosing and use of steroids for treatment of sick young infants). However, it also revealed promising opportunities for improvements.

The United States Agency for International Development (USAID) in Nepal requested that the Maternal and Child Survival Program (MCSP) build on the SNL situation analysis and coordinate a large, nationally representative survey to provide a more definitive picture of the current provision of outpatient PSBI care for newborns in the private sector. The results serve as a baseline against which to track change in availability and quality of outpatient PSBI management in the private sector. Study partners included CHD/Ministry of Health and Population (MOHPP), USAID, New Era, and MCSP. The survey was conducted in a representative sample of 25 districts between June and July 2017. Private shops and clinics were oversampled in four districts targeted for future piloting of an approach to improve quality of management of sick young infants in the private sector.

Maternal and Child Survival Program, Save the Children