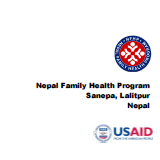 Every year globally, an estimated 4 million infants die and approximately two-third of all these deaths occur in the neonatal period (NNHS, 2004). A substantial proportion of deaths from infection are due to cord infections (WHO). Nepal has one of the highest neonatal mortality rates in the world which is 34 per 1,000 live births. Neonatal Mortality Rates currently accounts twothirds of all infant mortality (MoHP, New ERA and Measure DHS, 2006). In Nepal, most deliveries are conducted at home without the aid of skilled health worker in unhygienic way, which is usually accompanied by a high rate of infection in both mother and newborn.

Chlorhexidine is a proven antiseptic to reduce infections on neonatal cord. FCHVs for household level maternal and neonatal care practices have been mobilized under the current CB-MNC program being implemented in Banke, Jhapa and Kanchanpur districts. This gives an opportunity to introduce chlorhexidine at the community level combining with the CB-MNC package. In this context this qualitative study has been conducted in Bardiya- an adjoining district to Banke, for identification of an appropriate formulation, packaging and delivery of chlorhexidine.

The overall objective of the study was to explore the current cord-stump and skin care practices including current notions about best care for cord-stump, vulnerability and protection among Tharu, Muslim and Hill-Brahmin/Chhetri caste groups of Bardiya district. In addition this study also attempts to explore the most readily acceptable formulation of chlorhexidine application by the community members.

The sample size consists of 45 SSIs and 10 FGDs conducted in six VDCs of Bardiya. SSIs were conducted with RDW and GMs of Tharu, Muslim and Brahmin/Chhetri castes, cord cutting occupational groups and FCHVs serving in the local communities. The study was conducted from November 2006 through January 2007 and was implemented internally by NFHP M&E Team.