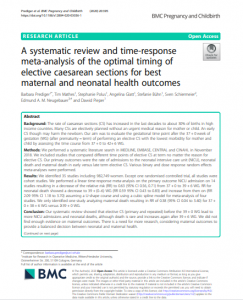 The rate of caesarean sections (CS) has increased in the last decades to about 30% of births in high income countries. Many CSs are electively planned without an urgent medical reason for mother or child. An early CS though may harm the newborn. Our aim was to evaluate the gestational time point after the 37 + 0 week of gestation (WG) (after prematurity = term) of performing an elective CS with the lowest morbidity for mother and child by assessing the time course from 37 + 0 to 42+ 6 WG.

We performed a systematic literature search in MEDLINE, EMBASE, CENTRAL and CINAHL in November 2018. We included studies that compared different time points of elective CS at term no matter the reason for elective CS. Our primary outcomes were the rate of admissions to the neonatal intensive care unit (NICU), neonatal death and maternal death in early versus late term elective CS. Various binary and dose response random effects meta-analyses were performed.