Home > Resources > Acceptability and feasibility of testing for HIV infection at birth and linkage to care in rural and urban Zambia: a cross-sectional study 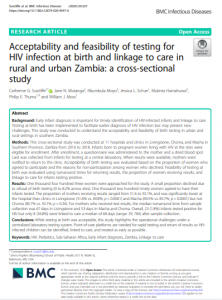 Early infant diagnosis is important for timely identification of HIV-infected infants and linkage to care. Testing at birth has been implemented to facilitate earlier diagnosis of HIV infection but may present new challenges. This study was conducted to understand the acceptability and feasibility of birth testing in urban and rural settings in southern Zambia.

This cross-sectional study was conducted at 11 hospitals and clinics in Livingstone, Choma, and Macha in Southern Province, Zambia from 2016 to 2018. Infants born to pregnant women living with HIV at the sites were eligible for enrollment. After enrollment, a questionnaire was administered to the mother and a dried blood spot card was collected from infants for testing at a central laboratory. When results were available, mothers were notified to return to the clinic. Acceptability of birth testing was evaluated based on the proportion of women who agreed to participate and the reasons for non-participation among women who declined. Feasibility of testing at birth was evaluated using turnaround times for returning results, the proportion of women receiving results, and linkage to care for infants testing positive.

While testing at birth was acceptable, this study highlights the operational challenges under a centralized laboratory testing system. Point-of-care platforms are needed for rapid testing and return of results so HIV-infected children can be identified, linked to care, and treated as early as possible.