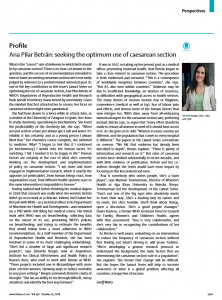 What is the “correct” rate of deliveries in which birth should be by caesarean section? There is no clear-cut answer to the question, and the success of recommendations intended to raise or lower an existing caesarean section rate is not easily judged by reference to a predetermined numerical goal. As one of the key contributors to this issue’s Lancet Series on optimising the use of caesarean section, Ana Pilar Betrán of WHO’s Department of Reproductive Health and Research finds herself in territory characterised by uncertainty. Given the mindset that first attracted her to science, her focus on caesarean section might seem paradoxical.

She had been drawn to science while at school; later, as a student at the University of Zaragoza in Spain, she chose to study chemistry, specialising in biochemistry. She loved the predictability of the chemistry lab, she says. “When you put acid on a base you always get a salt and water. It’s reliable, it has certainty, and as a young person I always liked that.” Her chemistry course complete, she switched to medicine. Why? “I began to feel that if I continued [in biochemistry] I would miss the human factor. It’s enriching. I felt I needed it to be happy in life.” Human factors are certainly at the core of what she’s currently working on: the development and implementation of policy on caesarean section. “I am more and more engaged in implementation research, which is exactly the opposite [of predictable]…How human beings react, how organisations react, how different health systems react to the same intervention is impossible to foresee.”