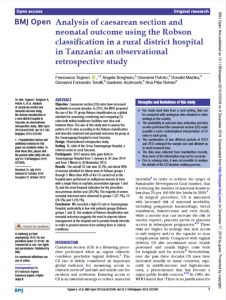 Caesarean section (CS) rates have increased worldwide in recent decades. In 2015, the WHO proposed the use of the 10-group Robson classification as a global standard for assessing, monitoring and comparing CS rates both within healthcare facilities over time and between them. The aim of this study was to assess the pattern of CS rates according to the Robson classification and describe maternal and perinatal outcomes by group at the Tosamaganga Hospital in rural Tanzania.

The overall CS rate was 35.2%, and about 90% of women admitted for labour were in Robson groups 1 through 5. More than 40% of the CS carried out in the hospital were performed on nulliparous women at term with a single fetus in cephalic presentation (groups 1 and 3), and the most frequent indication for the procedure was previous uterine scar (39.2%). The majority of severe neonatal outcomes were observed in groups 1 (27.7%), 10 (24.5%) and 3 (19.1%).

We recorded a high CS rate in Tosamaganga Hospital, particularly in low-risk patients groups (Robson groups 1 and 3). Our analysis of Robson classification and neonatal outcomes suggests the need to improve labour management at the hospital and to provide timely referrals in order to prevent women from arriving there in critical conditions. This is an open access article distributed in accordance with the Creative Commons Attribution Non Commercial (CC BY-NC 4.0) license, which permits others to distribute, remix, adapt, build upon this work non-commercially, and license their derivative works on different terms, provided the original work is properly cited, appropriate credit is given, any changes made indicated, and the use is non-commercial.