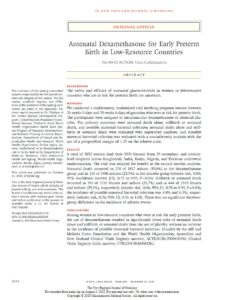 The safety and efficacy of antenatal glucocorticoids in women in low-resource countries who are at risk for preterm birth are uncertain.

We conducted a multicountry, randomized trial involving pregnant women between 26 weeks 0 days and 33 weeks 6 days of gestation who were at risk for preterm birth. The participants were assigned to intramuscular dexamethasone or identical placebo. The primary outcomes were neonatal death alone, stillbirth or neonatal death, and possible maternal bacterial infection; neonatal death alone and stillbirth or neonatal death were evaluated with superiority analyses, and possible maternal bacterial infection was evaluated with a noninferiority analysis with the use of a prespecified margin of 1.25 on the relative scale.

The WHO ACTION Trials Collaborators