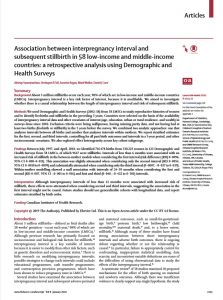 About 3 million stillbirths occur each year, 98% of which are in low-income and middle-income countries (LMICs). Interpregnancy interval is a key risk factor of interest, because it is modifiable. We aimed to investigate whether there is a causal relationship between the length of interpregnancy interval and risk of subsequent stillbirth.

We used Demographic and Health Surveys (2002–18) from 58 LMICs to study reproductive histories of women and to identify livebirths and stillbirths in the preceding 5 years. Countries were selected on the basis of the availability of interpregnancy interval data and other covariates of interest (age, education, urban or rural residence, and wealth) in surveys done since 2002. Exclusion criteria were being nulliparous, having missing parity data, and not having had at least two births (livebirth or stillbirth) in the 5 years before the survey. We combined two analytic approaches: one that analyses intervals between all births and another that analyses intervals within mothers. We report stratified estimates for the first, second, and third intervals, controlling for all past birth outcomes and intervals in a 5-year period, and other socioeconomic covariates. We also explored effect heterogeneity across key cohort subgroups.

Although interpregnancy intervals of less than 12 months were associated with increased risk of stillbirth, these effects were attenuated when considering second and third intervals, suggesting the association in the first interval might not be causal. Future studies should use generalisable cohorts with longitudinal data, and report estimates stratified by birth order.