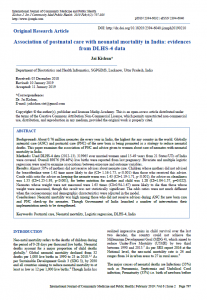 About 0.76 million neonates die every year in India, the highest for any country in the world. Globally antenatal care (ANC) and postnatal care (PNC) of the new born is being promoted as a strategy to reduce neonatal deaths. This paper examines the association of PNC and advice given to women about care of neonates with neonatal mortality in India.

Neonatal mortality was high among those who did not receive advices during ANC for new born care and PNC check-up for neonates. Though Government of India launched a number of interventions their implementation needs to be strengthened.