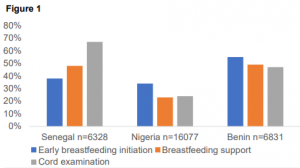 Globally, 99% of neonatal deaths occur in low- and middle-income countries with the highest rates in SubSaharan Africa and South Asia. The neonatal period – the first 28 days of life – is the most critical period for child survival. In 2017, 2.5 million deaths occurred during the neonatal period. Newborn care practices such as early initiation of breastfeeding (EIBF), breastfeeding support and umbilical cord examination play a key role in these deaths, especially in low-income countries. There is a dearth of information on the coverage of newborn care practices in West Africa.