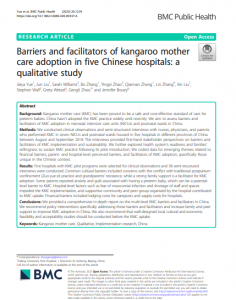 Kangaroo mother care (KMC) has been proved to be a safe and cost-effective standard of care for preterm babies. China hasn’t adopted the KMC practice widely until recently. Researchers aim to assess barriers and facilitators of KMC adoption in neonatal intensive care units (NICUs) and postnatal wards in China.

We conducted clinical observations and semi-structured interviews with nurses, physicians, and parents who performed KMC in seven NICUs and postnatal wards housed in five hospitals in different provinces of China between August and September 2018. The interviews provided first-hand stakeholder perspectives on barriers and facilitators of KMC implementation and sustainability. We further explored health system’s readiness and families’ willingness to sustain KMC practice following its pilot introduction. We coded data for emerging themes related to financial barriers, parent- and hospital-level perceived barriers, and facilitators of KMC adoption, specifically those unique in the Chinese context.

Five hospitals with KMC pilot programs were selected for clinical observations and 38 semi-structured interviews were conducted. Common cultural barriers included concerns with the conflict with traditional postpartum confinement (Zuo-yue-zi) practice and grandparents’ resistance, while a strong family support is a facilitator for KMC adoption. Some parents reported anxiety and guilt associated with having a preterm baby, which can be a parental-level barrier to KMC. Hospital-level factors such as fear of nosocomial infection and shortage of staff and spaces impeded the KMC implementation, and supportive community and peer group organized by the hospital contributed to KMC uptake. Financial barriers included lodging costs for caregivers and supply costs for hospitals.