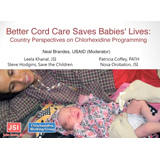 On January 30, 2013 JSI was joined by PATH and Save the Children in hosting a special panel discussion on the implementation of chlorhexidine programming in three countries: Nepal, Nigeria, and Madagascar.

The event, which was held at The Ronald Reagan Building in Washington, D.C., was moderated by USAID’s Neal Brandes. Participating in the discussion were JSI’s Leela Khanal and Nosa Orobaton, who spoke about their respective experiences in Nepal and Nigeria. Also on the panel were Trish Coffee of PATH and Steve Hodgins of Save the Children, who spoke about the planned implementation of chlorhexidine intervention in Madagascar through the USAID-funded MAHEFA project.

John Snow Inc., Save the Children