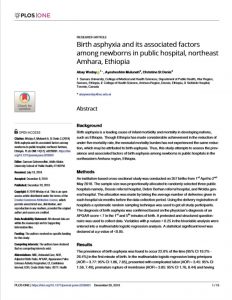 Birth asphyxia is a leading cause of infant morbidity and mortality in developing nations, such as Ethiopia. Though Ethiopia has made considerable achievement in the reduction of under-five mortality rate, the neonatal mortality burden has not experienced the same reduction, which may be attributed to birth asphyxia. Thus, this study attempts to assess the prevalence and associated factors of birth asphyxia among newborns in public hospitals in the northeastern Amhara region, Ethiopia.

An institution-based cross-sectional study was conducted on 357 births from 1st April to 2nd May 2018. The sample size was proportionally allocated to randomly selected three public hospitals namely, Dessie referral hospital, Debre Berhan referral hospital, and Woldia general hospital. The allocation was made by taking the average number of deliveries given in each hospital six months before the data collection period. Using the delivery registration of hospitals a systematic random sampling technique was used to get all study participants. The diagnosis of birth asphyxia was confirmed based on the physician’s diagnosis of an APGAR score < 7 in the 1st and 5th minutes of birth. A pretested and structured questionnaire was used to collect data. Variables with p-values < 0.25 in the bivariable analysis were entered into a multivariable logistic regression analysis. A statistical significant level was declared at a p-value of <0.05.

The study revealed that birth asphyxia is a common newborn complication in the Amhara region. Integrated mitigation measure to reduce neonatal mortality in the Amahar region should give due attention to primipara women and for these high-risk pregnancies in order for the region to achieve national and global commitment to have sustainable change in women and neonatal health.