Home > Resources > Can available interventions end preventable deaths in mothers, newborn babies, and stillbirths, and at what cost? 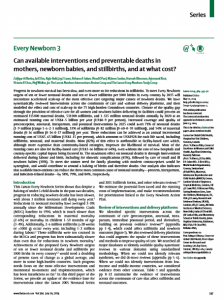 Progress in newborn survival has been slow, and even more so for reductions in stillbirths. To meet Every Newborn targets of ten or fewer neonatal deaths and ten or fewer stillbirths per 1000 births in every country by 2035 will necessitate accelerated scale-up of the most eﬀective care targeting major causes of newborn deaths. We have systematically reviewed interventions across the continuum of care and various delivery platforms, and then modelled the eﬀect and cost of scale-up in the 75 high-burden Countdown countries. Closure of the quality gap through the provision of eﬀective care for all women and newborn babies delivering in facilities could prevent an estimated 113 000 maternal deaths, 531 000 stillbirths, and 1·325 million neonatal deaths annually by 2020 at an estimated running cost of US$4·5 billion per year (US$0·9 per person). Increased coverage and quality of preconception, antenatal, intrapartum, and postnatal interventions by 2025 could avert 71% of neonatal deaths (1·9 million [range 1·6–2·1 million]), 33% of stillbirths (0·82 million [0·60–0·93 million]), and 54% of maternal deaths (0·16 million [0·14–0·17 million]) per year. These reductions can be achieved at an annual incremental running cost of US$5·65 billion (US$1·15 per person), which amounts to US$1928 for each life saved, including stillbirths, neonatal, and maternal deaths. Most (82%) of this eﬀect is attributable to facility-based care which, although more expensive than community-based strategies, improves the likelihood of survival. Most of the running costs are also for facility-based care (US$3·66 billion or 64%), even without the cost of new hospitals and country-speciﬁc capital inputs being factored in. The maximum eﬀect on neonatal deaths is through interventions delivered during labour and birth, including for obstetric complications (41%), followed by care of small and ill newborn babies (30%). To meet the unmet need for family planning with modern contraceptives would be synergistic, and would contribute to around a halving of births and therefore deaths. Our analysis also indicates that available interventions can reduce the three most common cause of neonatal mortality—preterm, intrapartum, and infection-related deaths—by 58%, 79%, and 84%, respectively.