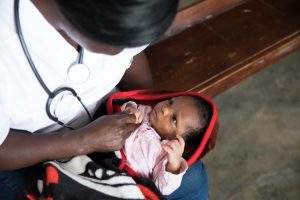 Alice the midwife holds 18-day-old baby Alex who was named after her in White Plains Clinic, Liberia.

Maternal and perinatal mortality are still unacceptably high in many countries despite steep increases in facility birth. The evidence that childbirth in facilities reduces mortality is weak, mainly because of the scarcity of robust study designs and data. We aimed to assess this link by quantifying the influence of major determinants of facility birth (cluster-level facility birth, wealth, education, and distance to childbirth care) on several mortality outcomes, while also considering quality of care.

Our study is a secondary analysis of surveillance data on 119 244 pregnancies from two large population-based cluster-randomised controlled trials in Brong Ahafo, Ghana. In addition, we specifically collected data to assess quality of care at all 64 childbirth facilities in the study area. Outcomes were direct maternal mortality, perinatal mortality, first-day and early neonatal mortality, and antepartum and intrapartum stillbirth. We calculated cluster-level facility birth as the percentage of facility births in a woman’s village over the preceding 2 years, and we computed distances from women’s regular residence to health facilities in a geospatial database. Associations between determinants of facility birth and mortality outcomes were assessed in crude and multivariable multilevel logistic regression models. We stratified perinatal mortality effects by three policy periods, using April 1, 2005, and July 1, 2008, as cutoff points, when delivery-fee exemption and free health insurance were introduced in Ghana. These policies increased facility birth and potentially reduced quality of care.

Higher proportions of facility births in a cluster were not linked to reductions in any of the mortality outcomes. In women who were wealthier, facility births were much more common than in those who were poorer, but mortality was not lower among them or their babies. Women with higher education had lower mortality risks than less-educated women, except first-day and early neonatal mortality. A substantially higher proportion of women living in areas closer to childbirth facilities had facility births and caesarean sections than women living further from childbirth facilities, but mortality risks were not lower despite this increased service use. Among women who lived in areas closer to facilities offering comprehensive emergency obstetric care (CEmOC), emergency newborn care, or high-quality routine care, or to facilities that had providers with satisfactory competence, we found a lower risk of intrapartum stillbirth (14·2 per 1000 deliveries at >20 km from a CEmOC facility vs 10·4 per 1000 deliveries at ≤1 km; odds ratio [OR] 1·13, 95% CI 1·06–1·21) and of composite mortality outcomes than among women living in areas where these services were further away. Protective effects of facility birth were restricted to the two earlier policy periods (from June 1, 2003, to June 30, 2008), whereas there was evidence for higher perinatal mortality with increasing wealth (OR 1·09, 1·03–1·14) and lower perinatal mortality with increasing distance from childbirth facilities (OR 0·93, 0·89–0·98) after free health insurance was introduced in July 1, 2008.

Facility birth does not necessarily convey a survival benefit for women or babies and should only be recommended in facilities capable of providing emergency obstetric and newborn care and capable of safe-guarding uncomplicated births.