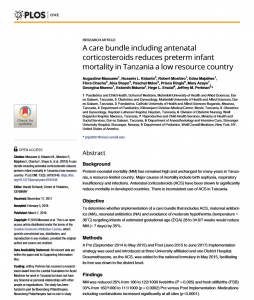 Preterm neonatal mortality (NM) has remained high and unchanged for many years in Tanzania, a resource-limited country. Major causes of mortality include birth asphyxia, respiratory insufficiency and infections. Antenatal corticosteroids (ACS) have been shown to significantly reduce mortality in developed countries. There is inconsistent use of ACS in Tanzania.

A Pre (September 2014 to May 2015) and Post (June 2015 to June 2017) Implementation strategy was used and introduced at three University-affiliated and one District Hospital. Dexamethasone, as the ACS, was added to the national formulary in May 2015, facilitating its free use down to the district level.

A low-cost care bundle, ~$6 per patient, was associated with a significant reduction in NM and FSB rates. The former presumably by reducing respiratory morbidity with ACS and minimizing infections with antibiotics. If these findings can be replicated in other resource-limited settings, the potential for further reduction of<5 year mortality rates becomes enormous.