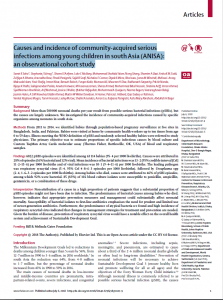 More than 500 000 neonatal deaths per year result from possible serious bacterial infections (pSBIs), but the causes are largely unknown. We investigated the incidence of community-acquired infections caused by specific organisms among neonates in south Asia.

From 2011 to 2014, we identified babies through population-based pregnancy surveillance at five sites in Bangladesh, India, and Pakistan. Babies were visited at home by community health workers up to ten times from age 0 to 59 days. Illness meeting the WHO definition of pSBI and randomly selected healthy babies were referred to study physicians. The primary objective was to estimate proportions of specific infectious causes by blood culture and Custom TaqMan Array Cards molecular assay (Thermo Fisher, Bartlesville, OK, USA) of blood and respiratory samples.

Non-attribution of a cause in a high proportion of patients suggests that a substantial proportion of pSBI episodes might not have been due to infection. The predominance of bacterial causes among babies who died, however, indicates that appropriate prevention measures and management could substantially affect neonatal mortality. Susceptibility of bacterial isolates to first-line antibiotics emphasises the need for prudent and limited use of newer-generation antibiotics. Furthermore, the predominance of atypical bacteria we found and high incidence of respiratory syncytial virus indicated that changes in management strategies for treatment and prevention are needed. Given the burden of disease, prevention of respiratory syncytial virus would have a notable effect on the overall health system and achievement of Sustainable Development Goal.