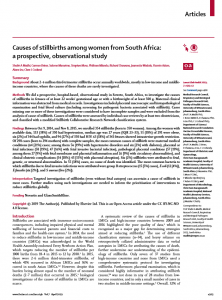 About 2·6 million third-trimester stillbirths occur annually worldwide, mostly in low-income and middle-income countries, where the causes of these deaths are rarely investigated.

We did a prospective, hospital-based, observational study in Soweto, South Africa, to investigate the causes of stillbirths in fetuses of at least 22 weeks’ gestational age or with a birthweight of at least 500 g. Maternal clinical information was abstracted from medical records. Investigations included placental macroscopic and histopathological examination and fetal blood culture (including screening for pathogenic bacteria associated with stillbirth). Cases missing one or more of these investigations were considered to have incomplete samples and were excluded from the analysis of cause of stillbirth. Causes of stillbirths were assessed by individual case reviews by at least two obstetricians, and classified with a modified Stillbirth Collaborative Research Network classification system.