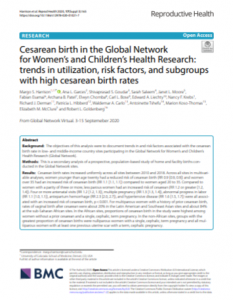 The objectives of this analysis were to document trends in and risk factors associated with the cesarean birth rate in low- and middle-income country sites participating in the Global Network for Women’s and Children’s Health Research (Global Network).

This is a secondary analysis of a prospective, population-based study of home and facility births conducted in the Global Network sites.