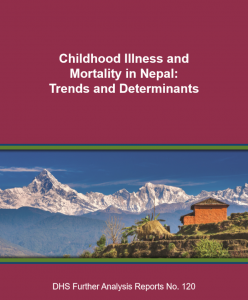 This report documents levels, trends and determinants of childhood illnesses (diarrhea, symptoms of acute respiratory infection (ARI, and fever), treatment or advice-seeking practices for childhood illnesses, and childhood mortality (neonatal and under-5 deaths) using data from 2006 and 2016 Nepal Demographic and Health Survey (NDHS).

The findings from this study showed that between 2006 and 2016, the prevalence of diarrhea and symptoms of acute respiratory infection (ARI) among under-5 children declined by 4% and 3%, respectively, while the prevalence of fever increased by 4%. Over the decade, treatment or advice-seeking practices from the health facilities or providers for diarrhea, symptoms of acute respiratory infection (ARI), and fever showed significant improvement. However, children from poor households were less likely to seek treatment or advice from health facilities or providers.

Reductions in neonatal and under-5 mortality were documented in Nepal over the decade. In addition, multivariate analysis showed that smaller neonates and neonates who were not weighed at the time of birth were more likely to die in the neonatal period, while neonates born in Province 1 had a lower likelihood of dying compared to those from Province 7 (Sudurpashchim Province). For under-5 children, those who had not received immediate newborn care were more likely to die before their fifth birthday.