Home > Resources > Childhood mortality during and after acute illness in Africa and south Asia: a prospective cohort study 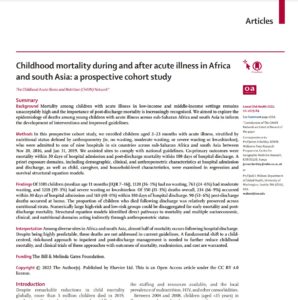 Mortality among children with acute illness in low-income and middle-income settings remains unacceptably high and the importance of post-discharge mortality is increasingly recognised. We aimed to explore the epidemiology of deaths among young children with acute illness across sub-Saharan Africa and south Asia to inform the development of interventions and improved guidelines.

In this prospective cohort study, we enrolled children aged 2–23 months with acute illness, stratified by nutritional status defined by anthropometry (ie, no wasting, moderate wasting, or severe wasting or kwashiorkor), who were admitted to one of nine hospitals in six countries across sub-Saharan Africa and south Asia between Nov 20, 2016, and Jan 31, 2019. We assisted sites to comply with national guidelines. Co-primary outcomes were mortality within 30 days of hospital admission and post-discharge mortality within 180 days of hospital discharge. A priori exposure domains, including demographic, clinical, and anthropometric characteristics at hospital admission and discharge, as well as child, caregiver, and household-level characteristics, were examined in regression and survival structural equation models.

Of 3101 children (median age 11 months [IQR 7–16]), 1120 (36·1%) had no wasting, 763 (24·6%) had moderate wasting, and 1218 (39·3%) had severe wasting or kwashiorkor. Of 350 (11·3%) deaths overall, 234 (66·9%) occurred within 30 days of hospital admission and 168 (48·0%) within 180 days of hospital discharge. 90 (53·6%) post-discharge deaths occurred at home. The proportion of children who died following discharge was relatively preserved across nutritional strata. Numerically large high-risk and low-risk groups could be disaggregated for early mortality and post-discharge mortality. Structural equation models identified direct pathways to mortality and multiple socioeconomic, clinical, and nutritional domains acting indirectly through anthropometric status.

Among diverse sites in Africa and south Asia, almost half of mortality occurs following hospital discharge. Despite being highly predictable, these deaths are not addressed in current guidelines. A fundamental shift to a child-centred, risk-based approach to inpatient and post-discharge management is needed to further reduce childhood mortality, and clinical trials of these approaches with outcomes of mortality, readmission, and cost are warranted.