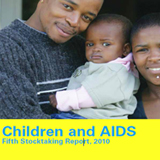 For nearly three decades, HIV and AIDS have been devastating individuals and families with the tragedy of untimely death and medical, financial and social burdens. Although children’s concerns have always been present within the great spectrum of need associated with HIV, they have to some extent been overshadowed by the very scale of the epidemic in the adult population. Thanks to improved evidence and accelerated action, however, the story of how the AIDS epidemic is affecting
children is being rewritten.

No longer a sidebar crowded out by the broader compelling narrative of HIV and AIDS, children are now central to strategies and actions to avert and address the consequences of the epidemic. It is estimated that more than 1,000 babies continue to be born with HIV every day, many of them destined to die before age two if they do not receive medication.1 Mothers are still dying. Adolescents are still
becoming infected with HIV because they have neither the knowledge nor the access to services to protect themselves, and those infected at birth are struggling to reconcile their emerging adulthood with their HIV-positive status.