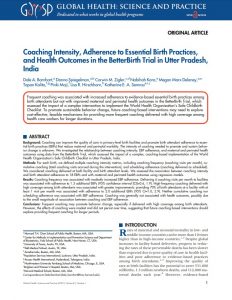 Coaching can improve the quality of care in primary-level birth facilities and promote birth attendant adherence to essential birth practices (EBPs) that reduce maternal and perinatal mortality. The intensity of coaching needed to promote and sustain behavior change is unknown. We investigated the relationship between coaching intensity, EBP adherence, and maternal and perinatal health outcomes using data from the BetterBirth Trial, which assessed the impact of a complex, coaching-based implementation of the World Health Organization’s Safe Childbirth Checklist in Uttar Pradesh, India.

For each birth, we defined multiple coaching intensity metrics, including coaching frequency (coaching visits per month), cumulative coaching (total coaching visits accrued during the intervention), and scheduling adherence (coaching delivered as scheduled). We considered coaching delivered at both facility and birth attendant levels. We assessed the association between coaching intensity and birth attendant adherence to 18 EBPs and with maternal and perinatal health outcomes using regression models.

Frequent coaching may promote behavior change, especially if delivered with high coverage among birth attendants. However, the effects of coaching were modest and did not persist over time, suggesting that future coaching-based interventions should explore providing frequent coaching for longer periods.