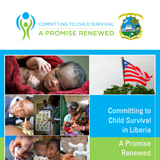 A Promise Renewed is a global effort to end preventable child deaths. By pledging to support the goals of Committing to Child Survival: A Promise Renewed, the Government of Liberia vows to redouble efforts to achieve Millennium Development Goals 4 and 5 by 2015, to reduce under-five mortality in all countries to 20 or fewer under-five deaths per 1,000 live births by 2035, and to focus greater effort on reaching the most disadvantaged and hardest-to-reach children in the country.

Liberia has made remarkable progress during the first decade of peace since the end of the 14-year civil war. According to the 2012 progress report of A Promise Renewed, the infant and under-five mortality rates were 58 and 78 per 1,000 live births respectively in 2010 in Liberia, a decline of over 68% from the 1990 levels of 241/1,000 (U-5MR), representing a remarkable annual reduction of about 5.4%, the highest in Africa.

In spite of the progress made in Liberia, neonatal mortality, which is currently estimated at 27/1,000 live births, has only seen an annual average rate of reduction of 2.2%, thus significantly slowing Liberia’s progress towards achieving the Millennium Development Goal 4 by 2015. The maternal mortality rate is also still very high at 770/100,000 (WHO, 2012 report) while stunting prevalence in children <5years of age is 36% (FSNS, 2012). The leading causes of childhood mortality and morbidity are malaria, acute respiratory infections (including pneumonia), diarrheal diseases and neonatal causes (APR Progress Report, 2012 ). The common neonatal causes in order of importance are preterm (34%), intrapartum related (28%), severe infection (27%), congenital (5%), diarrhoea (2%) and others (4%).