Home > Resources > Communication between mothers and health workers is important for quality of newborn care: a qualitative study in neonatal units in district hospitals in South Africa 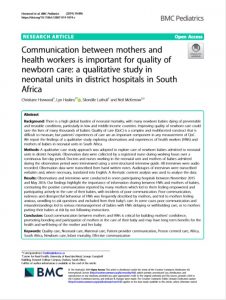 There is a high global burden of neonatal mortality, with many newborn babies dying of preventable and treatable conditions, particularly in low and middle-income countries. Improving quality of newborn care could save the lives of many thousands of babies. Quality of care (QoC) is a complex and multifaceted construct that is difficult to measure, but patients’ experiences of care are an important component in any measurement of QoC. We report the findings of a qualitative study exploring observations and experiences of health workers (HWs) and mothers of babies in neonatal units in South Africa.

A qualitative case study approach was adopted to explore care of newborn babies admitted to neonatal units in district hospitals. Observation data were collected by a registered nurse during working hours over a continuous five-day period. Doctors and nurses working in the neonatal unit and mothers of babies admitted during the observation period were interviewed using a semi-structured interview guide. All interviews were audio recorded. Observation data were transcribed from hand written notes. Audiotapes of interviews were transcribed verbatim and, where necessary, translated into English. A thematic content analysis was used to analyse the data.

Observations and interviews were conducted in seven participating hospitals between November 2015 and May 2016. Our findings highlight the importance of information sharing between HWs and mothers of babies, contrasting the positive communication reported by many mothers which led to them feeling empowered and participating actively in the care of their babies, with incidents of poor communication. Poor communication, rudeness and disrespectful behaviour of HWs was frequently described by mothers, and led to mothers feeling anxious, unwilling to ask questions and excluded from their baby’s care. In some cases poor communication and misunderstandings led to serious mismanagement of babies with HWs delaying or withholding care, or to mothers putting their babies at risk by not following instructions.

Good communication between mothers and HWs is critical for building mothers’ confidence, promoting bonding and participation of mothers in the care of their baby and may have long term benefits for the health and well-being of the mother and her baby.