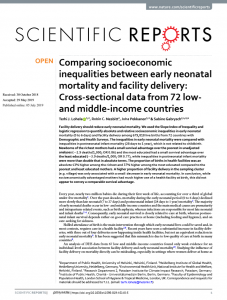 The proportion of births in health facilities was an absolute 43% higher among the richest and 37% higher among the most educated compared to the poorest and least educated mothers. A higher proportion of facility delivery in the sampling cluster (e.g. village) was only associated with a small  decrease in early neonatal mortality. In conclusion, while socioeconomically advantaged mothers had much higher use of a health facility at birth, this did not appear to convey a comparable survival advantage.