Home > Resources > Decline in the Incidence of Neonatal Sepsis in Rural Gadchiroli, India During the Twenty-one Years (1998-2019) Following the Home-based Neonatal Care Field-trial 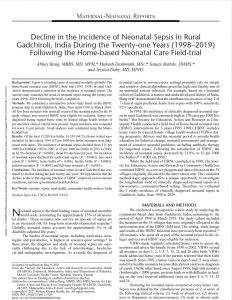 Sepsis is a leading cause of neonatal mortality globally. The home-based neonatal care (HBNC) field trial (1995-1998) in rural Gadchiroli demonstrated a reduction in the incidence of neonatal sepsis. The current study examines the trend of neonatal sepsis during the twenty-one years (1998-2019) following the trial’s completion.

We conducted a retrospective cohort study based on the HBNC program data in rural Gadchiroli, India, from April 1998 to March 2019. All live-born neonates who spent all or part of the neonatal period in the 39 study villages and received HBNC were eligible for inclusion. Sepsis was diagnosed during regular home visits by trained village health workers if pre-specified clinical criteria were present. Sepsis incidence was computed for seven 3-year periods. Trend analyses were conducted using the Mann-Kendall test.