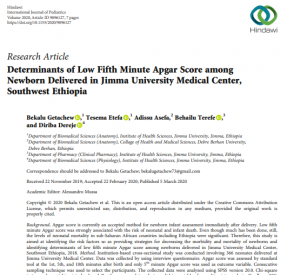 Apgar score is currently an accepted method for newborn infant assessment immediately after delivery. Low fifth minute Apgar score was strongly associated with the risk of neonatal and infant death. Even though much has been done, still, the levels of neonatal mortality in sub-Saharan African countries including Ethiopia were significant. Therefore, this study is aimed at identifying the risk factors so as providing strategies for decreasing the morbidity and mortality of newborns and identifying determinants of low fifth minute Apgar score among newborns delivered in Jimma University Medical Center, Southwest Ethiopia, 2018.

Institution-based cross-sectional study was conducted involving 366 neonates delivered at Jimma University Medical Center. Data was collected by using interview questionnaire. Apgar score was assessed by standard tool at the 1st, 5th, and 10th minutes after birth and only 5th minute Apgar score was used as outcome variable. Consecutive sampling technique was used to select the participants. The collected data were analyzed using SPSS version 20.0. Chi-square test was done at bivariate level and  value was used to select candidate variables for multivariate analysis. Finally, a 95% confidence interval was used to assess significance.