Home > Resources > Development and validation of a simplified score to predict neonatal mortality risk among neonates weighing 2000 g or less (NMR-2000): an analysis using data from the UK and The Gambia 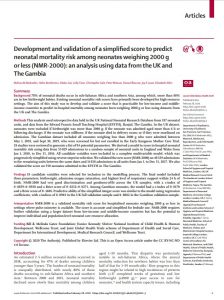 78% of neonatal deaths occur in sub-Saharan Africa and southern Asia, among which, more than 80% are in low birthweight babies. Existing neonatal mortality risk scores have primarily been developed for high-resource settings. The aim of this study was to develop and validate a score that is practicable for low-income and middle-income countries to predict in-hospital mortality among neonates born weighing 2000 g or less using datasets from the UK and The Gambia.

This analysis used retrospective data held in the UK National Neonatal Research Database from 187 neonatal units, and data from the Edward Francis Small Teaching Hospital (EFSTH), Banjul, The Gambia. In the UK dataset, neonates were excluded if birthweight was more than 2000 g; if the neonate was admitted aged more than 6 h or following discharge; if the neonate was stillborn; if the neonate died in delivery room; or if they were moribund on admission. The Gambian dataset included all neonates weighing less than 2000 g who were admitted between May 1, 2018, and Sept 30, 2019, who were screened for but not enrolled in the Early Kangaroo Mother Care Trial. 18 studies were reviewed to generate a list of 84 potential parameters. We derived a model to score in-hospital neonatal mortality risk using data from 55 029 admissions to a random sample of neonatal units in England and Wales from Jan 1, 2010, to Dec 31, 2016. All candidate variables were included in a complete multivariable model, which was progressively simplified using reverse stepwise selection. We validated the new score (NMR-2000) on 40 329 admissions to the remaining units between the same dates and 14 818 admissions to all units from Jan 1, to Dec 31, 2017. We also validated the score on 550 neonates admitted to the EFSTH in The Gambia.

18 candidate variables were selected for inclusion in the modelling process. The final model included three parameters: birthweight, admission oxygen saturation, and highest level of respiratory support within 24 h of birth. NMR-2000 had very good discrimination and goodness-of-fit across the UK samples, with a c-index of 0·8859–0·8930 and a Brier score of 0·0232–0·0271. Among Gambian neonates, the model had a c-index of 0·8170 and a Brier score of 0·1688. Predictive ability of the simplified integer score was similar to the model using regression coefficients, with c-indices of 0·8903 in the UK full validation sample and 0·8082 in the Gambian validation sample.

NMR-2000 is a validated mortality risk score for hospitalised neonates weighing 2000 g or less in settings where pulse oximetry is available. The score is accurate and simplified for bedside use. NMR-2000 requires further validation using a larger dataset from low-income and middle-income countries but has the potential to improve individual and population-level neonatal care resource allocation.