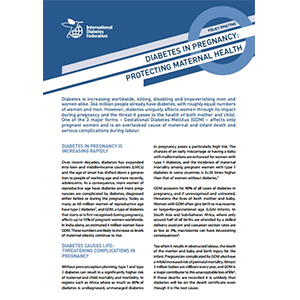 Diabetes is increasing worldwide, killing, disabling and impoverishing men and women alike. 366 million people already have diabetes, with roughly equal numbers of women and men. However, diabetes uniquely affects women through its impact during pregnancy and the threat it poses to the health of both mother and child. One of the 3 major forms – Gestational Diabetes Mellitus (GDM) – affects only pregnant women and is an overlooked cause of maternal and infant death and serious complications during labour.