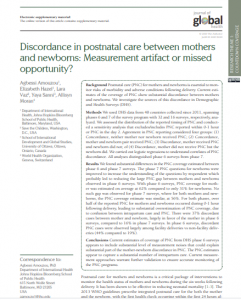 We used DHS data from 48 countries collected since 2011, spanning phases 6 and 7 of the survey program with 32 and 16 surveys, respectively, analyzed. We assessed the distribution of the reported timing of PNC and conducted a sensitivity analysis that excludes/includes PNC reported within 0-1 hour or PNC in the day 2. Agreement in PNC reporting considered four groups: (1) Concordance, neither mother nor newborn received PNC; (2) Concordance, mother and newborn pair received PNC; (3) Discordance, mother received PNC and newborn did not; of (4) Discordance, mother did not receive PNC but the newborn did. We carried out logistic regressions to understand correlates of PNC discordance. All analyses distinguished phase 6 surveys from phase 7.