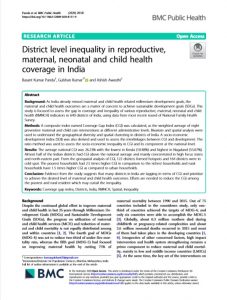 A composite index named Coverage Gap Index (CGI) was calculated, as the weighted average of eight preventive maternal and child care interventions at different administrative levels. Bivariate and spatial analysis were used to understand the geographical diversity and spatial clustering in districts of India. A socio-economic development index (SDI) was also derived and used to assess the interlinkages between CGI and development. The ratio method was used to assess the socio-economic inequality in CGI and its component at the national level.

The average national CGI was 26.23% with the lowest in Kerala (10.48%) and highest in Nagaland (55.07%). Almost half of the Indian districts had CGI above the national average and mainly concentrated in high focus states and north-eastern part. From the geospatial analysis of CGI, 122 districts formed hotspots and 164 districts were in cold spot. The poorest households had 2.5 times higher CGI in comparison to the richest households and rural households have 1.5 times higher CGI as compared to urban households.

Evidence from the study suggests that many districts in India are lagging in terms of CGI and prioritize to achieve the desired level of maternal and child health outcomes. Efforts are needed to reduce the CGI among the poorest and rural resident which may curtail the inequality.