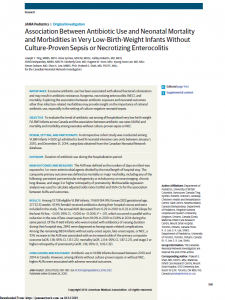 To determine whether antibiotic use in the first 14 postnatal days in preterm, very low birth weight (birth weight of ≤1500 g) infants is associated with risk after 14 days of age for late-onset sepsis, necrotizing enterocolitis (NEC), or death after controlling for severity of illness using the Clinical Risk Index in Babies II score, and determine whether duration of antibiotic exposure was associated with risk of adverse outcomes.

This retrospective cohort study included very low birth weight infants born at ≤326/7 weeks of gestation admitted to the neonatal intensive care unit from September 2010 to June 2014. Infants were excluded if they had major congenital anomalies or culture-proven sepsis, NEC, or death during the first 14 days of life. Antibiotic exposure was recorded as days of therapy and length of therapy in days.

After controlling for severity of illness, each day of antibiotic therapy provided to preterm, very low birth weight infants in the first 2 weeks of age is associated with an increased risk of late-onset sepsis, NEC, or death.