Home > Resources > Early initiation of breastfeeding and severe illness in the early newborn period: An observational study in rural Bangladesh 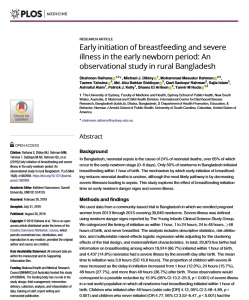 In Bangladesh, neonatal sepsis is the cause of 24% of neonatal deaths, over 65% of which occur in the early-newborn stage (0–6 days). Only 50% of newborns in Bangladesh initiated breastfeeding within 1 hour of birth. The mechanism by which early initiation of breastfeeding reduces neonatal deaths is unclear, although the most likely pathway is by decreasing severe illnesses leading to sepsis. This study explores the effect of breastfeeding initiation time on early newborn danger signs and severe illness.

We used data from a community-based trial in Bangladesh in which we enrolled pregnant women from 2013 through 2015 covering 30,646 newborns. Severe illness was defined using newborn danger signs reported by The Young Infants Clinical Science Study Group. We categorized the timing of initiation as within 1 hour, 1 to 24 hours, 24 to 48 hours, ≥48 hours of birth, and never breastfed. The analysis includes descriptive statistics, risk attribution, and multivariable mixed-effects logistic regression while adjusting for the clustering effects of the trial design, and maternal/infant characteristics. In total, 29,873 live births had information on breastfeeding among whom 19,914 (66.7%) initiated within 1 hour of birth, and 4,437 (14.8%) neonates had a severe illness by the seventh day after birth. The mean time to initiation was 3.8 hours (SD 16.6 hours). The proportion of children with severe illness increased as the delay in initiation increased from 1 hour (12.0%), 24 hours (15.7%), 48 hours (27.7%), and more than 48 hours (36.7%) after birth. These observations would correspond to a possible reduction by 15.9% (95% CI 13.2–25.9, p < 0.001) of severe illness in a real world population in which all newborns had breastfeeding initiated within 1 hour of birth. Children who initiated after 48 hours (odds ratio [OR] 4.13, 95% CI 3.48–4.89, p < 0.001) and children who never initiated (OR 4.77, 95% CI 3.52–6.47, p < 0.001) had the highest odds of having severe illness. The main limitation of this study is the potential for misclassification because of using mothers’ report of newborn danger signs. There could be a potential for recall bias for mothers of newborns who died after being born alive.

Breastfeeding initiation within the first hour of birth is significantly associated with severe illness in the early newborn period. Interventions to promote early breastfeeding initiation should be tailored for populations in which newborns are delivered at home by unskilled attendants, the rate of low birth weight (LBW) is high, and postnatal care is limited.

The University of Sydney, International Centre for Diarrhoeal Disease Research