Home > Resources > Effect of 4 % chlorhexidine on cord colonization among hospital and community births in India: a randomized controlled study 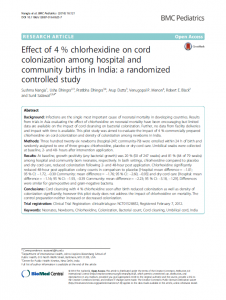 Background
Infections are the single most important cause of neonatal mortality in developing countries. Results from trials in Asia evaluating the effect of chlorhexidine on neonatal mortality have been encouraging but limited data are available on the impact of cord cleansing on bacterial colonization. Further, no data from facility deliveries and impact with time is available. This pilot study was aimed to evaluate the impact of 4 % commercially prepared chlorhexidine on cord colonization and density of colonization among newborns in India.

Methods
Three hundred twenty-six newborns (hospital-247; community-79) were enrolled within 24 h of birth and randomly assigned to one of three groups: chlorhexidine, placebo or dry cord care. Umbilical swabs were collected at baseline, 2- and 48- hours after intervention application.