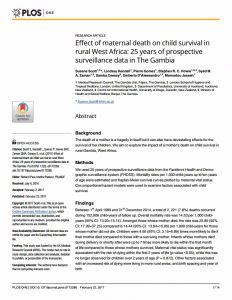 Background
The death of a mother is a tragedy in itself but it can also have devastating effects for the survival of her children. We aim to explore the impact of a mother’s death on child survival in rural Gambia, West Africa.

Conclusions
Mother’s survival is strongly associated with child survival. Our findings highlight the importance of the continuum of care for both the mother and child not only throughout pregnancy, and childbirth but beyond 6 weeks post-partum.