Home > Resources > Effect of timing of umbilical cord clamping on anaemia at 8 and 12 months and later neurodevelopment in late pre-term and term infants; a facility-based, randomized-controlled trial in Nepal 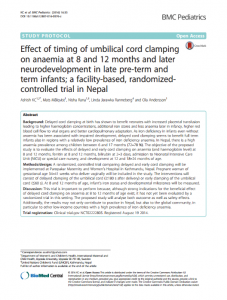 Delayed cord clamping at birth has shown to benefit neonates with increased placental transfusion leading to higher haemoglobin concentrations, additional iron stores and less anaemia later in infancy, higher red blood cell flow to vital organs and better cardiopulmonary adaptation. As iron deficiency in infants even without anaemia has been associated with impaired development, delayed cord clamping seems to benefit full term infants also in regions with a relatively low prevalence of iron deficiency anaemia. In Nepal, there is a high anaemia prevalence among children between 6-17 months (72-78%). The objective of the proposed study is to evaluate the effects of delayed and early cord clamping on anaemia (and haemoglobin level) at 8 and 12 months, ferritin at 8 and 12 months, bilirubin at 2-3 days, admission to Neonatal Intensive Care Unit (NICU) or special care nursery, and development at 12 and 18-24 months of age.

A randomized, controlled trial comparing delayed and early cord clamping will be implemented at Paropakar Maternity and Women’s Hospital in Kathmandu, Nepal. Pregnant woman of gestational age 34-41 weeks who deliver vaginally will be included in the study. The interventions will consist of delayed clamping of the umbilical cord (≥180 seconds after delivery) or early clamping of the umbilical cord (≤60 s). At 8 and 12 months of age, infant’s iron status and developmental milestones will be measured.

This trial is important to perform because, although strong indications for the beneficial effect of delayed cord clamping on anaemia at 8 to 12 months of age exist, it has not yet been evaluated by a randomized trial in this setting. The proposed study will analyse both outcome as well as safety effects. Additionally, the results may not only contribute to practice in Nepal, but also to the global community, in particular to other low-income countries with a high prevalence of iron deficiency anaemia.